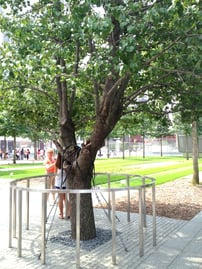 The callery pear tree at the 9/11 Memorial is known as the "Survivor Tree".  The tree was named "Survivor Tree" after it lived through the 9/11 attacks on the World Trade Center.  In October 2001, the tree was recovered from the rubble with broken roots, a blackened trunk and only 1 branch still living.  It was transported by the NYC Department of Parks and Recreation to the Arthur Ross Nursery in the Bronx and was not expected to survive.  In the spring of 2002, the tree was showing new growth and the caretakers at Arthur Ross Nursery were optimistic the tree would make it.  That tree was becoming a symbol for hope and renewal.

In December 2010 after reaching over 30 feet, the tree was returned to the World Trade Center site to become part of the 9/11 Memorial.   The planting was attended by a small group of people including city officials, community members and survivors.

9/11 survivor Keating Crown described the resilience of that callery pear tree by saying, "It reminds us all of the capacity of the human spirit to persevere."