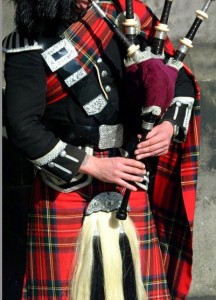 When the Irish and Scottish immigrated to the United States hundreds of years ago, they brought more than just their belongings; they brought a culture rich in tradition. They introduced the United States to pubs, St. Patrick’s Day and bagpipes. The Great Highland Bagpipe was often played at weddings, funeral and dances.

In the 1800s, it was not uncommon for several firefighters to die each day while on duty. The Irish firefighter’s funeral was typical of all Irish funerals and bagpipes were played.

Soon, families of non-Irish firefighters began asking for the pipes to be played for all fallen heroes. The bagpipes added grandeur to the solemn service. The most requested song was “Amazing Grace."

Today, bagpipe bands exemplify both firefighters and police officers and can have upwards of 60 members, formed with the common goal to honor those fallen heroes.