How is Call Volume Changing the Fire Service?

Non-Fire Calls On The Rise

When dispatch calls, there’s a vast number of scenarios that could follow. You may be sent to an actual fire scene, but more often than not these days, you’re heading to an MVA, medical emergency, or possibly a hospital transport.

Even as overall call volume has risen over the years, the National Fire Protection Association (NFPA) reports fire calls have dropped by a whopping 24.5% between 1980-2018 - that’s almost ¼ of the fires! On the other hand, EMS calls have spiked up 17.5%. 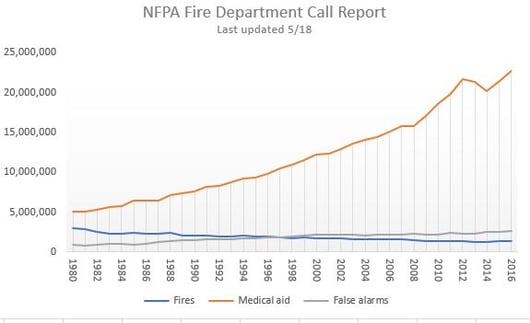 So, what has changed in our industry, in our communities, and across our nation to make such a drastic impact on the services provided by fire departments today?

The Beginning of Fire Prevention Training

America Burning (a 1973 research report published by the National Commission of Fire Prevention and Control) is often credited for being the leader in educating the public on methods of fire prevention. As a result of this report, the U.S. Congress, with support from President Gerald Ford, approved the Federal Fire Prevention and Control Act of 1974. This led to several initiatives which aimed to reduce fires by strengthening firefighter training, spreading prevention awareness, and implementing stricter safety protocols. Initiatives included:

The public has become increasingly mindful of the availability and accessibility of 911 EMS support. Since its inception in 1957, the National Association of Fire Chiefs’ simple number for reporting fires has taken on a whole new meaning. 911 is now known as the national telephone number offering citizens free, fast and easy access to safety services, thanks to the President's Commission on Law Enforcement and Administration of Justice, which opened the phone line to nationwide reporting for all emergency situations- not just fires.

This coupled with public recognition of different signs of common medical ailments have increased the likelihood of citizens calling for help. For example, left-sided weakness could be a symptom of stroke and SOB with back aches could be a precursor to a heart attack.

Yet, contrary to this evolution of call changes, only 16% of fire departments provide advanced life support (ALS), 46% offer basic life support (BLS), and nearly 39% don’t offer any form of emergency medicine, according to the U.S. Fire Department Profile Survey collected over 2015-2017.

Why Structural Fires Have Changed

In response to broader understanding of fire safety and prevention, fire codes have become stricter over the years. The NFPA 101 Life Safety Code, originally developed in the early twentieth century, for instance has underwent multiple updates from adding requirements for escape routes and alarms/detection systems to fire sprinklers and protection for interior finish.

We have also come a long way from the days of covering wood with vinegar, alum and clay as methods of fire-proofing.

Today, flame retardant chemicals are applied to fabrics and materials in order to slow or prevent the ignition or growth of fire. These chemicals are often found in modern upholstery, carpets, electronics, seat covers, etc.

But that’s not to say that we are safer from fires in today’s world. Despite the reduction in fires, homes are built with cheaper materials and furnishings are coated with more chemicals, so homes that do catch fire burn much hotter and faster than they once did.

UL Firefighter Safety - Side by side comparison of how dangerous common house fires have become.

According to the National Fire Protection Association, residents have a limited 2 minutes to get out of a modern home and reach safety. Luckily, advanced technologies in fire alarms, increased public awareness of preventative measures and routine fire inspections and drills have become standard practices.

Some other factors contributing to the large swing in call volume include:

Tell us what other factors you have noticed and how your department has changed over time in the comments below. 👇