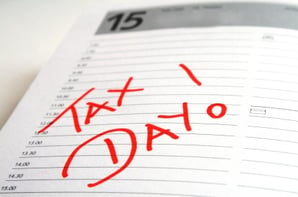 Firefighters, first responders and police officers should expect to be a little bit busier April 15th due to two dreaded words: Tax Day. The road is increasingly less safe on this particular day. Statistics show an increase in fatal road accidents each year on the date that income taxes are due.

Researchers from the University of Toronto suspected that stress from the yearly tax deadline might lead to more road accidents. After sorting through 30 years of National Highway Traffic Safety Administration records and comparing the number of people involved in fatal car crashes on the date income tax was due to the number involved one week before and one week after the due date, the results indicated that the risk of being in a fatal road accident rises on tax day, on or around April 15th every year. The results of study can be found in the April 11, 2012 issue of The Journal of the American Medical Association.

On average, about 13 additional people were involved in fatal car crashes every tax day, an increased risk of about six percent. The risk crosses all boarders, including;  all regions of the country (though it was highest in the West), all races and genders and pedestrians/passengers were all affected. The only group immune was people over the age of 65.

Reasons for the increase in accidents due to stress include:

Distracted drivers result in dangerous roads. Tax Day is April 15, 2013. It would be wise to be on alert while on the road that day and be prepared to be busy!

Fire-Dex is the premiere fire protection gear company. Manufacturing firefighting equipment from fire helmet to fire boots and everything in between, Fire-Dex protects those who risk personal peril in service of others.