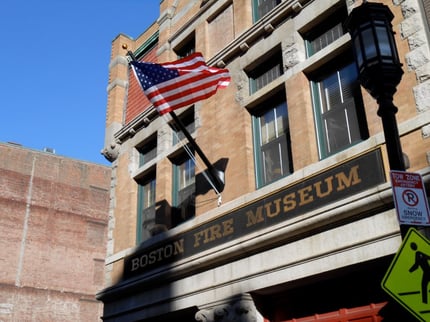 The Boston Fire Museum is located at 34 Congress Street in Boston, Massachusetts in an old firehouse. The Museum not only educates and informs the general public about fire safety but it preserves firefighting memorabilia and supports the fire service.

The Museum is owned and operated by the Boston Sparks Association, a fire buff club of people interested in the fire service. The operation is completely run by volunteers that are dedicated to informing people about the history of fire fighting and one of the oldest fire departments in the country.

There are many exhibits in the museum including antique fire apparatus, fire alarm displays and artifacts, photo displays, and fire fighting equipment in an architecturally significant building. The firehouse was built in 1891 without any columns or poles on the main apparatus floor. This is because the second floor is held up from above. Originally there were 6 stalls for the horses that would pull the apparatus. The building received “Landmark” status in 1987 and was included in the National register of Historic Places.  Click here to see some images from the building and its exhibits. http://www.bostonfiremuseum.com/exhibits_interior_exterior.htm