A seven-foot stone monument was constructed in 1981 in Emmitsburg, Maryland to honor the brave men and women who lost their lives to protect their community. The monument features a sculpted Maltese Cross, the traditional symbol of the fire service. There is an engraved plaque on the monument that bears a message from President Ronald W. Reagan. There is an eternal flame at the base of the monument to symbolize the spirit of all firefighters - past, present and future. The names of the men and women of the fire service who have died in service to their communities since 1981 encircle the monument, listed on plaques. Whenever a firefighter dies in the line-of-duty, fire officials post a notice of the death at the monument and lower flags at the site to half-staff. 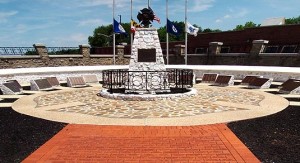 Every October, the National Fallen Fire Fighters Foundation sponsors an official national tribute to all firefighters who died in the line of duty during the previous year.  The ceremony includes the placing of a Presidential Wreath at the monument and dedication of a plaque honoring those who died in the line-of-duty. Thousands are expected to be in attendance at the National Fallen Firefighters Memorial Weekend October 5-7, 2013.

The Memorial Weekend is a time for sharing and healing for the families of fallen firefighters. Representatives from Honor Guard and Pipe Band Units participate as part of this solemn tribute and commemoration of fallen loved ones. Families in attendance have expressed how much they appreciate the honor bestowed upon their loved ones at the national tribute.

Have you visited the memorial? Tell us!