The Maltese Cross...Or Is It the St. Florian Cross?

Take a look at any firehouse around the world and you’re likely to see some form of the iconic cross-shaped fire department logo. Have you ever wondered where this logo originated, and how it came to be synonymous with “Fire Department”? While the evolution of the icon is fuzzy, it can be traced back to two distinct points of origin, one as early as the 4th century.

The earliest origins of the cross trace back to Saint Florian, a Roman officer in the early 4th century who, in addition to commanding the ranks of the Northeastern Roman army, was tasked with organizing firefighting brigades. Florian’s men weren’t the first group of firefighters in Rome, but they were certainly the best. Florian was so dedicated to protecting Roman citizens that he organized and trained an elite group of soldiers whose sole duty was to fight fires.

Later in Florian’s life he was found to have refused to worship the Roman gods, and was sentenced to death. His body was recovered and buried, and he was later venerated and declared a saint. Ever since, fire fighters and military bands worldwide have adopted the iconic cross that can be seen in many depictions of Florian.

Though Florian’s cross is probably the most common, many departments have adopted the “Maltese Cross”. Though similar, this particular icon has a different origin story. The first group to don the cross was known as the Order of the Knights Hospitaller, or the Knights of St. John. This group, founded in Jerusalem during the 11th century, banded together and risked their lives to fight off the attacking Saracens and their deadly fire-bombs. As recognition for their bravery, the Knights of St. John were given the island of Malta. Soon after, the symbol on the island’s flag became synonymous with this order of fire fighters and the bravery they showed in the Holy Land. 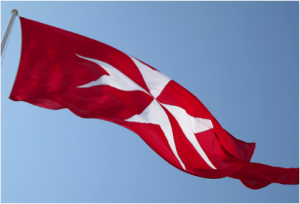 Whether your department uses St. Florian’s Cross, or the Maltese Cross, it is clear that the symbol represents the honor and bravery shown by firefighters. As the New York City Fire Department puts it: “The Maltese Cross is a firefighter's badge of honor, signifying that he works in courage - a ladder rung away from death.”