Medina, Ohio - April 20th, 2016 - Fire-Dex has launched a new NFPA 1971 compliant hood, the H41 Interceptor™, designed to keep potentially carcinogenic particulates and other harmful contaminants off of firefighters' jaws, faces, and necks;  areas identified as highly absorptive and more permeable than other areas of skin(1), and are likely not getting enough protection from hazardous particles with the FR knit hood technology that is currently available(2). 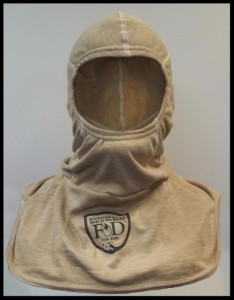 The development of this hood was inspired by the reports referenced above; the Firefighter Cancer Support Network Report(1) and the FAST Test Report, Commissioned by the IAFF(2).  The first report stated that firefighters  have a "significantly increased risk... for a number of cancers, including multiple myeloma, nonHodgkin's lymphoma and prostate and testicular cancer" (1).  This report also discussed that soot and smoke particles readily absorb and hold liquid and gaseous chemicals, that "soot has ultrafine particles that... [are] also absorbed through the skin traveling to most organs including the brain"(1), and that skin adsorption rate increases 400% with every 5°F increase in skin temperature. (1) The FAST Test Report demonstrated that particles at 2.5 micron size penetrated the standard FR knit hood (soot and smoke particles are usually 1 micron or less) and left a concentrated, heavy deposit on the subject's neck, cheeks, ears and jaw.

The H41 Interceptor™ was developed in collaboration with DuPont™, utilizing their revolutionary new material, DuPont™ Nomex® Nano-Flex, that can block fine particulates almost as well as an impermeable membrane.  Unlike FR moisture barrier membranes however, this new lightweight (0.8oz/yd2), "barely-there" material is actually completely breathable; Nomex® Nano-Flex is a non-woven, web technology, made of submicron continuous fibers.  The H41 Interceptor™ is constructed with Nomex® Nano-Flex sewn between two layers of  6.0oz/yd2 PBI®/Lenzing to provide the maximum performance for particle barrier filtration, comfort, breathability, thermal protection and protection in flashover condition.  The H41 Interceptor™ is patterned to protect the integrity of the filtration system and uniquely designed to promote easy donning and doffing from the stowed position to the SCBA face piece channel.

This chart demonstrates the remarkable difference in particulate blockage from a standard FR Knit Hood to an FR Knit Hood with Nomex® Nano-Flex (measuring from 0.5 - 0.2 microns).

The H41 Interceptor™ is available for order immediately and can be purchased from an authorized Fire-Dex Distributor.