Medina, Ohio – October 15, 2019 - Fire-Dex announces its recognition as a 2019 Cascade Capital Business Growth Honoree. This is the third consecutive year and sixth time overall that Fire-Dex has received this award as one of the fastest growing businesses in Northeast Ohio. This year, Fire-Dex was also recognized with the Greatest Employee Growth award in Manufacturing.

Since their origination in 1989, Fire-Dex has acquired four businesses, including Chieftain Manufacturing, TECGEN PPE, Darwood Manufacturing, and most recently, Gear Wash. In addition, Fire-Dex expanded their headquarters last year in Medina, Ohio, bringing 30 new jobs to the county. 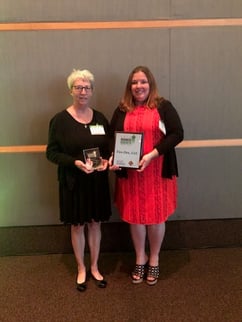 While Fire-Dex continues to grow at a rapid pace, they are focused on providing an excellent work environment for their growing staff. Fire-Dex has also been recognized with the NorthCoast 99 Best Places to Work award four times.

“Equipped with on-site training facilities, it [Fire-Dex] invests in the success of its employees as they, in turn, invest in the company’s efforts to develop new life-saving technologies to address the leading causes of occupational deaths in firefighters: heat stress and cancer,” stated Smart Business Magazine. “Improving its communities within and without, Fire-Dex maintains the business philosophy and culture on which it was founded as it continues to expand.”

Fire-Dex received the award October 3 at the Cascade Capital Business Growth Awards ceremony at John S. Knight Center in Akron, Ohio. The Business Growth Awards recognize and honor businesses from a seven-county region in Ohio that have achieved superior growth in sales and/or employment over the past five years, creating major economic benefits for the local economy.

Fire-Dex, headquartered in Medina, Ohio, is a leading manufacturer of head-to-toe protection for first responders, including turnout gear, rescue PPE, boots, hoods, gloves and helmets. With a strong emphasis on health and safety, Fire-Dex has paved the path of innovation for the manufacturing of firefighting gear while focusing on the continuous improvement of our products and processes. Visit www.firedex.com for more information.