George Washington: Past President and Firefighter

As we celebrate Presidents’ Day, we highlight the first President of the United States AND past volunteer firefighter, George Washington.  George served Alexandria Fire Department in Virginia after it was founded in 1774.

Alexandria thus lays claim to having the oldest fire engine company in the United States. When the organization was founded in 1774, it was originally known as the Friendship Fire company. The members of the company unanimously elected Washington as an honorary member, and forwarded him a copy of the minutes.

As a token of his appreciation, Washington began looking at different kinds of fire engines in Philadelphia, and in 1775 he purchased the best firefighting apparatus on the market at the time. In fact, a piece of this apparatus can be found in old house on South Alfred Street.

The organization was established for “mutual friendship”, hence the name Friendship Fire Company. They agreed to carry “two leather buckets and one great bag of wide linen” to every fire. The old company still exists today, though it is not active. Its old engine remains to be one of the biggest curiosities in the city of Alexandria. 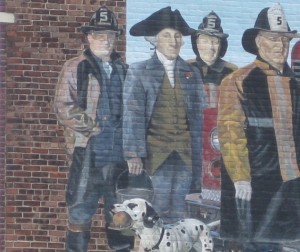 George Washington as a Fireman

The photo above is from the Inman Square Fire Station Muralin in Cambridge.  The mural was painted in 1980 and restored in 1999 by Ellary Eddy.  It depicts the firefighters of Engine Company No. 5.  In it, George Washington is holding a pail. He was included to commemorate the time he spent in Cambridge during the Revolution and in recognition of his service as a volunteer firefighter in Virginia.